This video was made for PHYSICAL EDUCATION, an experimental new media/video/performance show curated by Christine Janokowicz and Paula Nacif at Futbol Chicago. It combines my instrument RGB.VGA.VOLT with other analog video tools and found footage.
Portions of this video were made at Signal Culture in Owego, NY signalculture.org

I spet the some time in the summer of 2014 learning and documenting the Sandin Image Processor to inform RGB.VGA.VOLT–a VGA-based audio video synthesizer–and to prepare to teach the realtime class in the School of the Art Institute's Film, Video, New Media, and Animation department. This video is a short excerpt of a long session of exploring the IP's oscillator modules while sonifying its outputted video signal.

RGB.VGA.VOLT is an audio/video synthesizer that enables realtime exploration of the rich materiality concealed beneath the consumer interfaces of cathode ray tube computer monitors. By hacking and improperly rewiring the cables of these obsolete devices to short their video signals, their black-boxed analog infrastructure is liberated and driven by digitally synthesized high-frequency complex waveforms, audio playback, and feedback loops that fully exploit their latent visual spectrum. Inspired by early video tools such as the Sandin Image Processor and the Paik-Abe Synthesizer as well as contemporary programming and error-based approaches to sound and moving image, RGB.VGA.VOLT revives an analog aesthetic that has acquired a renewed power and potency in the present era of digital immateriality. The instrument, demonstrated on four VGA computer monitors in this video, combines custom built software, hardware modification, and DIY instrumentation.

An installation of 17 modified cathode ray tube televisions and computer monitors, interfaced with a custom programmed network computer system algorithmically generating audio and video.
The excerpt contains multiple moments in the system in which high-frequency sine waves are synthesized in Max/MSP and sent into the red, green, and blue pins of a VGA cable, generating highly controllable visualizations of audio being bent into video.

Studio documentation of Cracked Ray Tube ahead of a performance at the Vancouver New Music Festival.

Cracked Ray Tube is a collaborative realtime project by James Connolly and Kyle Evans that breaks and disrupts the interfaces of analog televisions and computer monitors to produce flashing, screeching, wobbulating, self-generated electronic noise and video.

Exploring the electromagnetic sonic and visual spectrum with a degausser.

The third examply of my earliest experiment sending no-input audio mixing into the red, green, and blue pins of a hacked VGA cable. 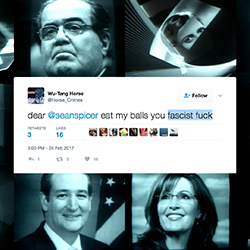