Real, Life Feeds (2007-2009) was a web-based remix project that satirically appropriated leftist rhetoric of culture jamming and undermining the spectacle (as conceived by Guy Debord and other 20th century theorists) under the guise of a fictitious guerilla media broadcasting group that offered an alternative media system to counter mainstream sensationalism. The project's website recreated a local news website from my hometown of Saginaw, Michigan by pulling content directly from its servers (RSS feeds provided realtime updated news stories) and redistributing it glitched. In the center of the site was a fake live video feed (it was actually just a video that perpetually "loaded" and failed to receive a proper signal) of a "body-video-broadcast organism" in which its members would broadcast their daily lives through hand-held video cameras that they took everywhere they went. Comedic videos of these supposed broadcasts were made and edited to look like 80s and early 90s consumer video cameras were doing the live broadcasting. The news station's "Breaking New Tipline" was trolled with actual phone calls in performances that played digital garbage that was generated by glitching WNEM's video content.

The project exploited the reproducibility of digital systems and purposefully blurred the line between fiction and reality while incorporating internet-native trolling practices and conspiratorial rhetoric. 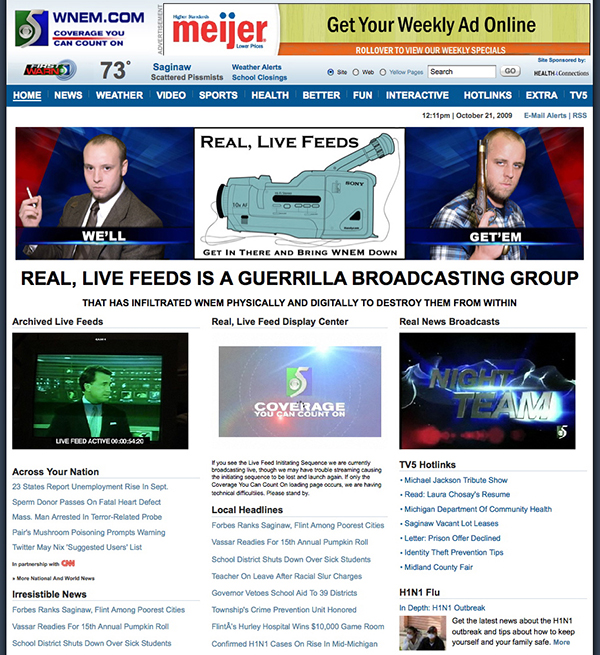 The project was installed in SAIC's Sullivan Galleries as my BFA thesis project with the following mission statement, most of which was appropriated from leftist theoretical texts:

REAL, LIVE FEEDS IS A GUERRILLA BROADCASTING GROUP THAT HAS INFILTRATED WNEM DIGITALLY TO DESTROY THEM FROM WITHIN.

WE WORK TOWARD THE EMANCIPATORY DESTRUCTION OF AUTHORITARIAN SPECTACLE DISTRIBUTORS THAT OFFER US THE CONSUMPTION OF OUR OWN MISFORTUNES AND THE MASOCHISTIC BASKING IN THE SENSATIONALIZED SHIT-STATE IN WHICH WE ARE TOLD TO LIVE.

THE WNEM BREAKING NEWS TIP LINE IS THOUGHT OF AS A MOMENT OF FALSE AND IMPOTENT FREEDOM, AS A POINT OF ENTRY FOR DESTRUCTIVE INFILTRATION AND AS SUCH IS ATTACKED THROUGH THE FEEDING OF WNEM’S OWN DIGITAL GARBAGE THAT ACTS AS OUR MISSION STATEMENTS AND COMMUNIQUES DIRECTLY TO THE HEADQUARTERS OF THE INSTITUTION UNDER ATTACK WE ARE NOT ATTEMPTING TO START A CONVERSATION.


These videos accompanied the text: